The Hat Man is often described as a dark shadow whose shape includes a readily visible outline of a (usually) wide-brimmed hat. Sometimes a cape is also mentioned by those who claim to have seen Hat man. Some people report specific shapes of the hat, always an older style hat, but those who report seeing "Hat Man" with a hat in the shape of a Fedora seem to have quite negative experiences with whatever entity they've encountered.

Often, this fedora-wearing entity is what people are meaning when they say they saw, specifically, "The Hat Man."

Many who report a general shadow entity with a hat shape included in their description speak of a shadow person who behaves with curiosity toward the area it's in or toward the person who sees it. The hat shadow will usually vanish - sort of dissipate or fade away - but in any case, the encounter usually lasts a very short duration and the eyewitnesses usually report few negative details surrounding the encounter.

The Fedora Hat Man seems a different sort of shadow person entity and most often, people report a feeling of absolute terror upon seeing this particular shadow entity. People also report that they can feel this entity feeding off their terror and this hat man doesn't fade away - it walks away, much like a human being. Its shadow seems to have more substance and many paranormal buffs who believe this entity is worth studying up on and paying attention to generally believe that it is not like other shadow people at all - it is much more malevolent.

Some of the added fear might come from the red, glowing eyes that some people report with this specific hat man. The eyes are also something that most other shadow people do not have.

I'm still researching on what to do if you encounter this Fedora topped Hat Man. So far, I've come across some typical answers which don't satisfy me:

1) control your fear
(well, that's easier said than done now, isn't it?)
2) pray
(what if IT has no respect for this sort of thing?)
3) forcibly tell the shadow to leave and reclaim your space
(nice idea)

The problem here is that I've been reading up on this, checking out interviews, recent radio-show commentary and what I'm learning is that sometimes asking Hat Man to leave doesn't work. He/it may leave initially but those who've experienced hat man often report that the Hat Man returns again - same terror-inducing energy, same strange solidness of dark shadow, etc.

The photo below has been circulated around the net in many locations. It's considered a depiction of a general Hat Man shadow person. 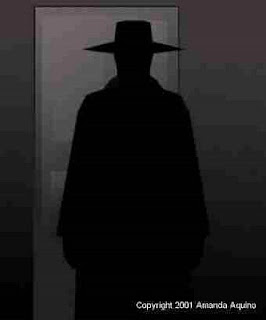