It's TRUE! Chuck Norris is a Bad-Ass

More of a meme than urban legend, the Chuck Norris is so tough/tougher than anything stories, video clips and such are perfect for copy pasta (copying and pasting all over the net - forums, blogs, facebook status spots, etc).

Meme bits are related to urban legends (memes are basically INSIDE OF urban legends) but are a whole separate type of message entity all on their own - however - they're closely enough related that they deserve a spot on this blog!

Since I haven't written much on memes but have definitely studied on them (even "truly studied them" as in - at University level courses) and know that they're EVERYWHERE, I figured the best meme topic to post about FIRST - is one of my favourites - Chuck Norris!

People already know Chuck is a bad-ass tough guy. In the movies, he always plays a bad butt character, a TOUGH GUY. In real life, Chuck actually IZZZZZZ A Tough Guy. He really DID serve in the American Air Force and he really IS a martial arts expert. Among his acting roles, he played a Texas Ranger, Sergeant Cordell Walker, who believes in an old code of conduct that is considered a really firm and dedicated TOUGH GUY code... the code of the Old West (cowboy/ranger and settler code - tough stuff for sure) and his character Sgt. Walker was a Marine before becoming a Texas Ranger.

Now, I think one of the reasons why Norris memes are so powerful, spread so fast, and are so wide-spread is because as a tough guy, capable of difficult stunts and physical acts and such, Norris IS THE REAL DEAL and not just some actor or total pretender. Most actors in tough guy roles are physically fit and taught how to act in the roles they play from working out at the gym and job-shadowing or reading about a character/job position or field of work. Chuck Norris, I'm sure, does some of the same but he's the real deal. He knows what military is like, what martial arts are (various types, too) - and has even founded his own school of martial arts (find it by going to ufaf .org), and is an active and very outspoken philanthropist (funds for marginalized and sick kids, veteran supports, United Way spokesperson, Make A Wish Foundation spokesperson, much more).

All of Mr. Norris' acting feats appear to have real-life counterparts:


Although his experience in military is Air Force experience, and his Texas Ranger character was a role on a television series, people have thought highly enough of Mr. Norris to have made him an honorary Marine (2007 - Source) and an honorary Texas Ranger (2010 - Source).

All that said, the memes that float around about Chuck Norris are cool because they often emphasize his positive traits. Not all memes (I will argue most memes do NOT) do this! Of course, the memes and statements are almost all hyperbole (exaggeration) of the most dramatic variety, but they're awesome, in my opinion. They command attention because, if they were toned down, they could be imagined to be true when related to Chuck Norris - or - if toned down, nobody's opinion of Norris as a Tough Guy would change in the least.

For example: Chuck Norris does not open doors. The doors have the common courtesy to open for him.

The above statements are found on the "Chuck Norris Facts" site (a site housing hundreds of memes and statements about Norris - mostly memes but also with some factual information on-site about Norris). While a number of memes are designed to cause reactions containing detrimental ridicule of the subject, many of the Chuck Norris memes do not cause this reaction.

Here are a few nice (and mostly postive) ones: 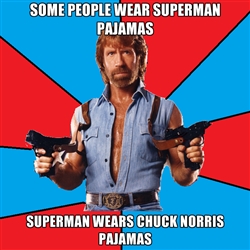 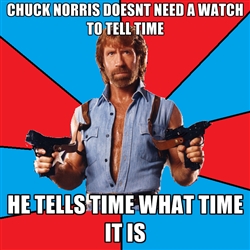 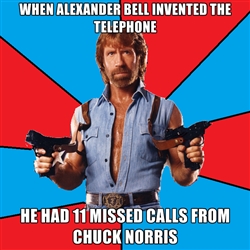 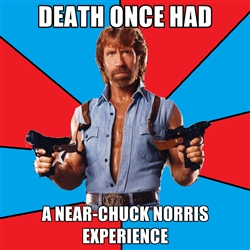