Where Did The Visitor From Lanulos Go?

Back in the mid to late 60's a widespread UFO flap happened in the U.S.A. (well, waves of them happened, actually). During the midst of a flap in late 1966, near a town called Parkersburg in West Virginia, a strange being came down out of the sky and out of a weirdly shaped craft - to speak at the side of a roadway (I-77) to one, Mr. Woodrow Derenberger.

The entity gave his name as Indrid Cold. He told Derenberger he was from Lanulos, a planet in the Ganymede galaxy. He told Derenberger that Lanulos was similar to Earth - in that they both have flora, fauna, and different seasons. He also conveyed that there is no poverty, misery, or hunger on Lanulos and that life expectancy is 125-175 years on his planet, as measured in Earth years.

More strangely, when Derenberger came forth with his story, he said the information and conversation didn't happen by way of regular speech. It was a telepathic communication between himself and Mr. Cold!

Source: The Mothman Prophecies (Chapter 5) by John A. Keel

This story didn't end here, however, it became largely unpopular and went out of the attention of mainstream sources. Derenberger was heavily ridiculed after he disclosed details of his experiences. He moved his family a few times to try and get away from nosy and opinionated people, experienced a series of harsh phone calls and other discomforting things that only a non-empathetic public and insensitive groups of people can do to fellow humans. Ultimately the negative attention caused a split in the family and Derenberger lost his wife and kids - only one of whom (his daughter but not his two sons) has come forward in recent years to update or make any statements on this story.

An article with more details on Derenberger and his claims: Indrid Cold

Derenberger died in 1990 and his daugher, Taunia Bowman , has since revised his book, Visitors From Lanulos (originally published, and publishing paid for by Derenberger, in 1971), added some statements and changed some names at the request of other family members. 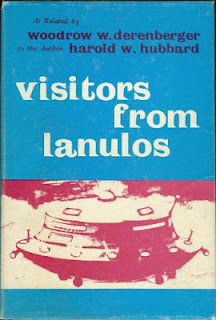 About Derenberger's claims, Taunia has said (in News and Sentinel article June 11, 2011), that she accepted her father's story and had an open mind. She felt that he talked to her about the Indrid Cold/Lanulos topics because he felt he COULD talk to her about it (while he couldn't speak to very many other people, especially the rest of his family about these things).

My final thoughts are that it's a shame that Derenberger was ostracized, ridiculed, to the point of a family split. I am glad that Taunia Bowman, at least, reconciled and spent time with her father so that he didn't miss out on all his family relationships.

Mr Derenberger seems to be the only one who had experiences with Indrid Cold, so now that Derenberger is gone, it looks like there is little hope of understanding the whole Indrid Cold phenomenon better (unless Taunia Bowman still has points to disclose).

It seems the visitor from Lanulos simply is no more.
Posted by Mythbuster2009 at 3:59 PM